According to Myanmar Public Health Department, 81 people have died of Influenza A (H1N1) since January. This year’s death toll broke the record of 2017 when there were 38 deaths nationwide. H1N1 was first discovered in 2009 and once declared as global pandemic by WHO after 182,166 infected cases and 1,799 deaths. Influenza was proven as a viral respiratory disease of global importance, many experts believed that it was the greatest threat to global public health.

With the goal of strengthening pandemic preparedness for influenza to make the world safer, WHO launched Global Influenza Strategy for 2019-2030 in March. It provided a framework for worldwide from surveillance to disease prevention and control. “The question is not if we will have another pandemic, but when. We must be ready and prepare as prevention is always better than cure.” said by Jason Lin, General Manager of DEREKDUCK.

During this H1N1 battle in Myanmar, ULTITEC was selected to provide ultimate protection for frontline operators and ensured they back home safely after mission completed. Appropriate protective clothing was the occupational shield for these heroes to “Act without fear!” especially during disease control and disaster management. The premium microporous fabric of ULTITEC 2000 and ULTITEC 3000T offered outstanding barriers against wide range of chemical liquids, blood, body fluid and infective agents. Their protection level was proven to exceed WHO specification for Ebola infection control. 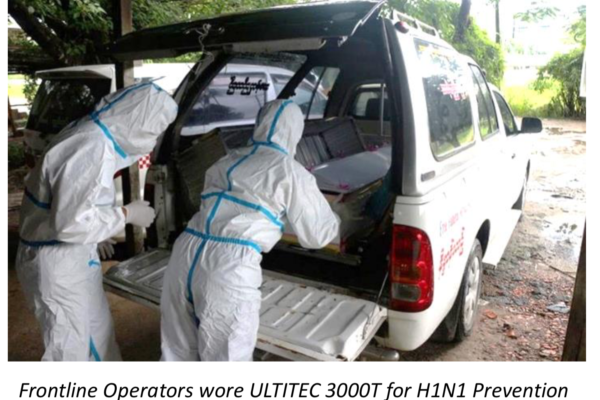 The symptoms of H1N1 were fever, sore throat, running nose, body aches, vomiting, diarrhea etc. It can be transmitted via human-to-human mainly through airborne droplets from sneezing and coughing. H1N1 evolved continuously, thus people can get infected multiple times throughout their lives. Due to influenza was highly contagious, frontline operators such as healthcare professionals, laboratory staffs, funeral services providers, cleaning and disinfection workers should follow standard infection control.

It was your social responsibility to practice hand hygiene and cough etiquette (Eg. Cover your mouth with tissue and turn your face away) to avoid influenza. If you developed symptoms, please wear surgical mask, stay away from crowded places and seek medical attention immediately. Influenza occurred all over the world, with an annual global attack rate estimated at 5-10% in adults and 20-30% in children. DEREKDUCK believed influenza pandemic can be reduced by global preparedness, this will allow international community to cope with H1N1 more successfully. We shall start now by preparing sufficient resources for any possible disease control battle.