The first fall armyworms (FAW), or Spodoptera frugiperda, have been spotted in Taiwan on June 8 after plum rains blew them in from China. The Bureau of Animal and Plant Health Inspection and Quarantine (BAPHIQ) has announced 11 kinds of pesticides, including Neem oil and Bacillus thuningiensis, which can be sprayed on corn, rice, and sorghum to fend off the FAW. According to Food & Agriculture Organization of the United Nations (FAO), FAW spread to Africa in 2016, and across Asia including Yemen, India, Bangladesh, Myanmar, Thailand, and Sri Lanka in 2017, invaded thousands of hectares of maize fields literally overnight and triggered high alerts about future food security. 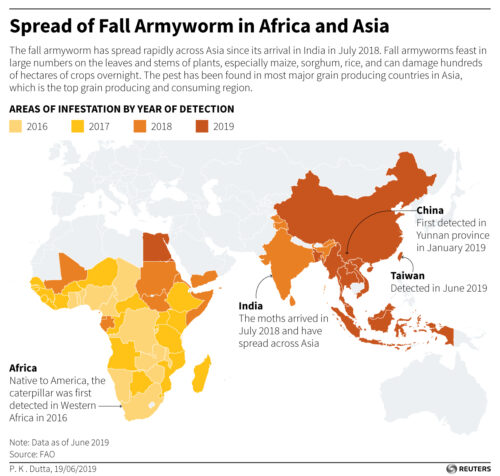 In Thailand, it has badly affected the country’s corn crop, much of which is sold to the animal feed industry. In the case of Sri Lanka, there were reports on 40,000 hectares had been infested and caused damages on 20 percent of crops. China is the biggest maize producer in Asia, and second largest producer globally, economic losses there and in other Asian countries have not yet been tallied, while estimation of economic damage from FAW in Africa ranged from US$ 1-3 billion. Once an infestation is confirmed, governments are required to raise awareness and monitored the presence and spread of FAW on maize and other crops.

FAO has been working with relevant authorities to initiate awareness programmes that inform and train on integrated pest management techniques. These includes identifying natural enemies of the FAW, enhancing natural biological controls and mechanical controls, such as crushing egg masses and employing the use of biopesticides. The use of pesticides needs to be very carefully considered, given that FAW larvae hide largely in the ring of leaves, and pesticides can have negative effects on environment and public health.